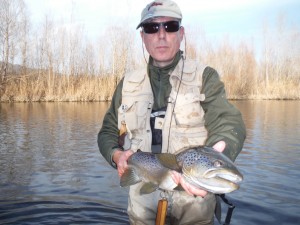 Fish a large one is the fisherman’s dream. The majority of large trout live in the greats rivers and river Segre have the ideal conditions for fish large trout.

Izaak Walton in his book “The Complete Angler” says that the rivers with wide, shallow and deep streams are the rivers who have the best large trout to be caught. And so it is in effect Río Segre.

Río Segre it’s the quintessential trout river in Pyrennes. Born in France near the frontier of Spain.

Through the years the river (as many rivers) has been transformed by the hand of man (dam), so at present the Segre is a fantastic river for fly fishing. 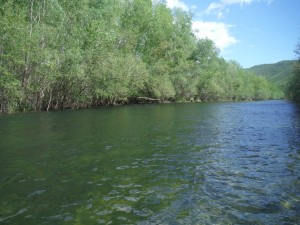 It’s not surprising that in a few days fishing by any stretch in the wide, shallow and deep streams and the numerous pools, we can fish many brown trouts with 50 cm and also many brown’s with 60 cm and 70 cm and some larger trout, it’s possible.

Río Segre it’s the longest river in Catalonia and it’s an hour and a half from Barcelona. Río Segre have 80 km with trout fishing. The last part it’s a extensive area (28 km) and it’s one of the best for catch large brown trout. Also this part have very good rainbows. In this area the river have 25 mts width on average, and it’s easy to walk. It’s a very quiet area and it makes the silence and the peace that fly fishing needs. Only the songs of the birds and the murmur of the water accompany the fly fisher.

The best seasons for practice the fly fishing are autumn, winter and the spring. This excellent area it’s open all year for fly fishing with catch and release. In winter fishing with streamers you can catch a trophy brown trout. In the months October, November and December average you enjoy with good fishing days, fishing with dry flies and nymphs. February, March and April also amazing. The licenses and permits are very cheap, 60€ license and trout fishing permits for a week or 30€ for 3 fishing days with license and 3 permits.

The dry flies, nymphs and the streamer are very effective in this waters. The streamers are very used for catch the trophy browns. In autumn and in spring you can make good fishing using dry flies and nymphs. The ephemeras and the sedge are the essential flies in Rio Segre. Also, Río Segre it’s a very good place for fishing with nymphs. The trouts bites very well with hare ear and phaisant tails with tungsten balls (2.5 gr until 3.5 gr). 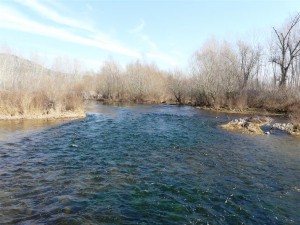 The common rods for fly fish are 9 and 10 foot rods with 4-5-6 lines. I recommend 5-6 lines. The tippets that we common use are 5X and 4X. Also you can fish with 6X for selective and difficult trout. I recommend to fish with a 5X tippet by normal fishing. So, if we see a big one, we change the tippet by 4X. If we fish with streamers the 3X and 2X it’s the right tippet.

I recommend to use Polar Tech trousers cause the river are cold. We prefer and use breathable waders, but many fisherman’s use the neoprene wader with boot. The boots with felt sole are prohibited in Catalonia, and we use rubber soles with tungsten studs. It’s important to use always a wading staff to prevent falls and wettings. 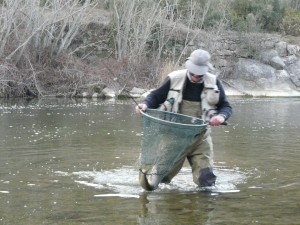 The brown trout of Rio Segre are very combative and beautiful and the scenery it’s also pretty and wild. Near the river we can see wild boars and roe deer and many otter.