The fly rod should be some what robust. The flimsy rods bend easily, better protect the thin threads but have the great inconvenience that costs the comfort of his master with a big fish. A fly line 5 or 6 is ideal for fly-fishing and help us to dominate large trout on condition that their action is at least average, and even better if you have a medium-fast and progressive action. The fast action rods are also very suitable for fishing of these big fish. Fish in a big river like the Segre in the middle part requires a reed to give us full guarantees, both in length and in its action. This is very important because it is not the same fish in a small or medium river great river, which is never totally fordable only in part and therefore can not go after a fish refuge in a deep current or that is just on the other side of the well is deep. These captures demand to be worked directly with the rod and reel with a decent hand brake, which is like a fly fisherman should carry their catch, based on skill and technique, not jumping and running into the river like chasing trout You were a dog pulls on the leash and the owner is behind this because it can not hold. For this is the rod and reel and of course the thread and expertise of the fisherman. That is, it requires a thorough understanding of what is being done. All this comes with practice and this with displeasure and obstacles that presents us fishing. 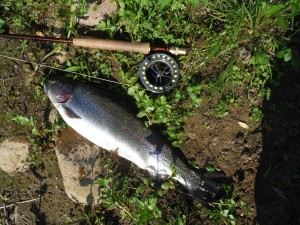 Once prospected the site in question, think where you can be primed at any time or a good piece. You have to look and look nice and slow. And look closely at a well, is also fishing. You have to throw the bait when we are certain that what we are doing in our favor and instead not afraid to future we intend to collect pieces. The other day I was sitting watching the water stream was a huge puddle. The truth is, not lacking anything. Lying on the opposite bank, large stones in the course of the mainstream, spread veins of water, steep banks and deep trees and finally a few meters from where he was sitting, a beach of small rocks sticking on the surface. The depth was so poor that it should not exceed the best span. Looking at those rocks, I realized after a while the tail of a large trout. The animal ran the circumference of each stone nymphs looking up the edges of these. When not showing its tail occasionally she taught her dorsal fin. All this made it very slowly and very conscientiously and was doing it for half an hour in a 25 meters upstream. Taking a fly in these conditions is very risky and that will lead only to tread water is the rapid escape of the fish and also alertness that will put the entire sector. It is best to leave him alone, waiting for better time for which it is situated. 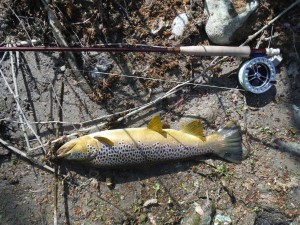 A large brown fished in Ter with a little nymph

A fish when bigger is not by chance. It has reached this size because it has managed to escape deception of fishermen and brutal enemies as otters and cormorants. At the slightest noise, shade or just anything that alters the least his normal pace, will lead to the stampede. Once we completed the survey we can test the place if you do not know, fording depth to assess if it is necessary at some point, especially our "mess". That is, the best place to do it more comfortably our nothing or little to hinder us and allow us to get to if moving, to avoid detection, the posts of the pieces pitches. So launcher fly with some experience and technique can throw and catch, sweeping many parts of the place without being seen or heard. This is important, because we do not know exactly (just as we suspect) may be where the fish or fish that look and is best done with discretion and secrecy. That is, we are hunting.