I went fishing for the first time in my life, at the age of six years old. In 1969 I spent part of the summer in a small village high Urgell. The cart with rubber wheels and pulled by an old mule, carrying four children to a stream near the village. An old man wearing dark cardigan, watch chain and beret, serious looking and serene, a great humanity and patience ran the small tour. Arre Coronela !!! He said to the mule ... It was July and into the heat of eleven o'clock, less or more, which announced a long day of summer sun. We were sitting on the wooden plank as a seat she wore between wooden railings truck. It was a nice walk round. The animal did not have any hurry and dragged the car with complete nonchalance, in the near-odd kilometer ride, the car constantly varied, at every step, between the bars and the harness of the mule. The asphalt road in a very long line was a monotonous languor between the torpor of the heat wave ... especially around. In the morning there were blackbirds and nightingales in the bards, who encouraged travel between grain fields mowed, but only to return almost mechanical annoying cicadas even more soporific to the trip back to the village.

The river was small, spotless, a sublime water clarity. He had a small walkway painted white and elevated as a small bridge to cross in front of the era avenues and old orchard is for this reason that we put the name of "the passarel.la". Above the humble little bridge of concrete there was a small pool full of red tag barbel and soufies and below the bridge, a small waterfall that gave rise to some fountains as a jet where small fish to fresh were posted stream . Coronela !!!, tras, tras !!!,  Josep told "the world", as he back the stubborn mule with all the trappings and the car to park it at one end of the field. In the end, a long and tiring "so" he puts an end to the operation of timber truck parking. Then he took off his leather harness the animal and put a cloth bag hanging just behind the ears by a mule tape to eat in the shade of almond trees.

No one wore cane. When we reached the river, “l'Oncle”, he cuts some American reeds, tied them to a piece of nylon and gave them a hook and a piece of rolled lead. With this and the help of earthworms in the orchard, we spent all summer catching fish then we had dinner at home. This man entered old age, had just bought a rod in his life, a Grau Vell yellow handle and a reel "Mitchell" model 324, for fishing occasionally wild trout Segre. For years I fished with him, and he just who was the first book left me trout fishing of Joan Agut, interesting and very readable book which I learned how beautiful it is to read of any issue that is appreciated. Fried fish in the humble house of l'Oncle with accompanying chicory salad as a constituted our dinner three times a week. - "Són dolços i fins els cuarrois, oi?" -. The little barbels fried with a little fine flour passed through the mouth and ate great with head and spinal included. Accompanying some red wine carafe, which at that time was considered as healthy, take a little wine to children as one beverage as healthy and digestive. 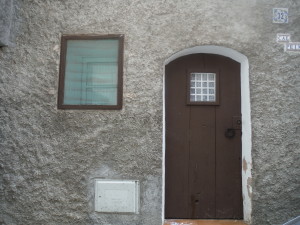 The old house was a charming humility. In the dining room there was an old bookshelf with a showcase of fine crystal and ordinary, where his woman kept some dishes and porcelain cups were left over from an old dishes used and as a decoration. The atmosphere of the house and the smell given off not forget while I live; It was gloomy, sad, old smell, sting snuff and cooked milk, which are fed almost exclusively its kind and old wife, Constancia.  From the balcony of the room the green waters of the swamp of Oliana bottle and background, rickety and rugged Serra Turp, one of the foothills of the Serra del Cadí is contemplated. The small wooden door painted red tile from the entrance of the house, always he had the keys. I never understood why they were so worn if never used to close the house. The bedroom off the dining room was immaculate simplicity. A cot wool mattress springs and a single bedside table with cabinet, no lamp or attire. After dinner we played dominoes brisca and to the many, that was eleven-peak hours when we went to bed, each in our house in the village. They were summer sweetness and a delicious serenity. In games that we had before and after the war, they went hunting in remote forests on the slopes of Cadi. I already had the great naturalist and hunter instinct landscape, I imagined those hunting parties that lasted weeks and sleeping in the woods, after hunting all day, hares, rabbits, marbled and some chamois that hunting dogs made available and double-barreled shotguns. When they returned to the village, hunting pieces were distributed equally, but never told me the way he kept for so many days. My imagination flew and thought about those mountain village safaris men, dressed in makeshift costumes of wool and leather esparto slippers , armed with shotguns and dogs with black powder cartridges, scrambling with dogs on the rugged slopes of Cadi .

He once told me how he had hunted a great eagle, that in those days it was considered a harmful bird for hunting. Chamois hunting in one of the rocky scree of Cadi, planning appeared the great eagle that shot with a cartridge pelets for the chamois, breaking a wing . As he approached the animal, this will lunged with claws and had to move to the dogs to not damage them. "Mundo” came up to offer a branch of "rojalet" pine for big bird claws get strongly to this and thus carry hunting camp and later to the village. He explained that with eagle feathers for a very fine nibs and ink were built in good quantity. It was years later, near the end of his life when he told me that during the war and postwar years he had been in prison and on death row waiting to be executed. And that was when he showed me the notebooks ... They were thin notebooks grid of yellow caps thicker paper pages, like those worn by schoolchildren in the 30s these were resolved within each and every one of the problems of algebra, arithmetic, geometry and calculus in the vast Espasa Calpe encyclopedia. They were written to nib presented beautifully, without a single stain of ink and all geometric figures drawn superbly accurate and reflected mode. The man lived his entire life taking every second of your time and transmitting to others the essence and meaning of this, wisdom, goodness and work, without having more than indispensable. He never raised his voice, had a great sense of humor, very fine and polite and never saw him angry. I can assure you that this person lived happily and peacefully until the age of 93 years old. He fished all his life.